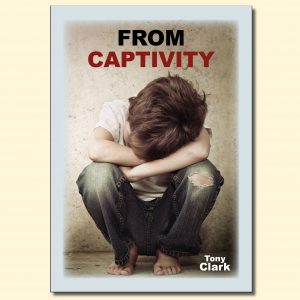 FROM CAPTIVITY
by TONY CLARK

As a child, John is torn from his parents David and Marie when they were all abducted during enemy bombing in 1941. John was dumped in a run-down orphanage and subjected to verbal abuse and canings when other boys were to blame. He was often cold and hungry. John was never far from Marie’s thoughts, the more so when she was certain she had seen him in Rochester. She was frequently abused by her captor, Spooner, and closely guarded or kept in a locked room, waiting for him to return and press demands on her. Whenever David thought about his wife and son he cried, not knowing what had become of them. Every week, his father visited him in Maidstone prison, seldom with good news. David’s yacht designs were committed to memory; would he ever be free to build them alongside his son?

The book’s author, Tony Clark, has pledged to donate £1.00 to the NSPCC for every copy of his book that he sells, to support them in the work that they do to help children and young people facing difficult and frightening situations. From Captivity is the fourth novel published by Tony Clark, following his thrillers Thieves’ Gate, Cosimo’s Room and Lethal Touch.