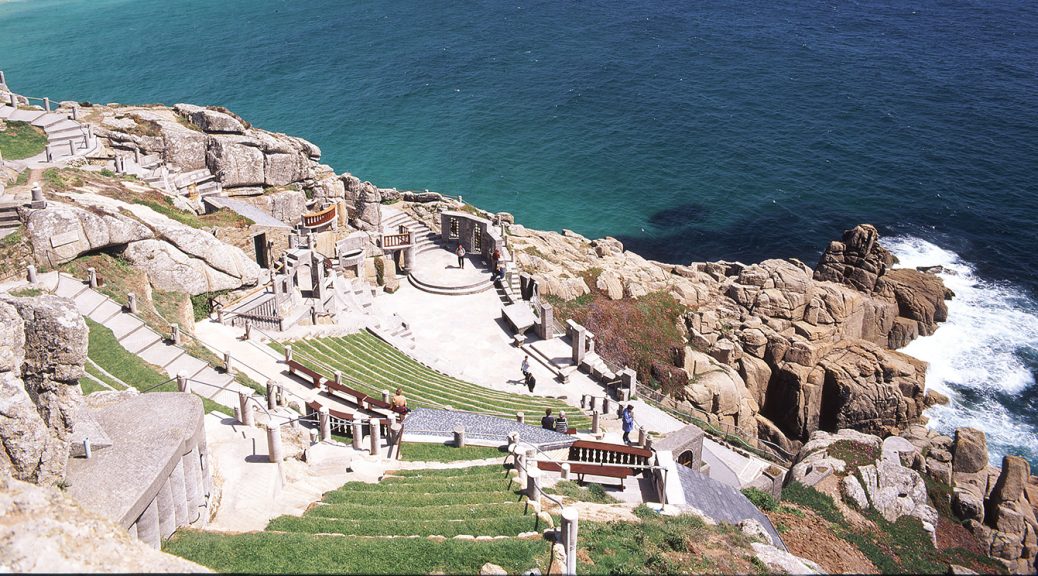 My train hurtles through miles of open countryside, past fields of stubble and leafy green crops in straight lines. There’s long grass dotted with white blooms and yellow tufts and clouds of summer wildflowers float across the landscape like purple smoke. We whizz past sun-scorched farms, pigeons peck at corduroy soil and hay bales lie on the earth like massive half-corks. I close my eyes and a sun-shadow-sun-show flashes on my eyelids like lightning. I can hear the gentle pulsing of wheels on tracks and the whiny rumble of the engine mingled with a murmur of conversation at the end of the carriage.

I’m travelling to the far end of Cornwall to see a play at The Minack, which is as close to heaven as a theatre can be. The name means ‘rocky place’ in Cornish; it’s perched on the edge of a granite cliff overlooking the sea behind the stage, high above Porthcurno Beach where the sand is soft like warm butter. 250,000 people visit every year when there isn’t a pandemic on – about a third are there to see a show during the summer months and the rest are just gazing around in awe of this timelessly beautiful place.

The Minack looks like a Roman amphitheatre but no, it was built in 1932 by Rowena Cade, a tiny woman with the courage, grit and dogged determination of a Gladiator. Rowena lived in Minack House with her mother, and in 1929 she belonged to a local drama group that put on A Midsummer Night’s Dream by William Shakespeare in a nearby meadow. Two years later, they were looking for a new venue to perform The Tempest and Rowena thought that the cliffs below her garden would be a good place for a makeshift theatre. So, she and her gardener cleared some space and built rows of seating and a stage by August the following year. The show was a great success – the actors got dressed up in the house and the audience bought tickets at a trestle table and scrambled down the slope to take their seats as the sun went down.

But Rowena didn’t stop there. She worked on The Minack for the next 50 years, building more places to sit, walkways, steps and pillars made from concrete mixed with sand that she dragged up from the beach. Many of the stone-like structures are engraved with patterns and words that she carved out with the end of a screwdriver while the sandy concrete mix was still damp. The theatre is run by a charitable trust and it’s grown a lot over the years, so there are now dressing rooms, a control room built into the rockface, an exhibition centre, cafés and a shop.

Timing is a critical factor in the smooth running of The Minack. Theatre companies compete for the opportunity to perform there, and the chosen ones have exactly one week from midday on a Saturday to set up, do seven performances and leave. That first show in 1932 was lit by car headlamps and a torch on a power cable running from Rowena’s house. Nowadays there’s a professional lighting system, but the crew only have Saturday night to test it and make sure it all works properly because there’s a dress rehearsal at 8pm on Sunday night, the show opens on Monday and everybody clears off by Saturday morning. There’s no lift, so all the scenery, props and costumes are passed up the cliff from person to person standing in a line like a human conveyor belt.

The show goes on whatever the weather and umbrellas aren’t allowed. If you time it well, you’ll be watching a play on a nice warm evening. Time it badly and you’re huddled under a blanket in the rain, or shivering as an icy wind blows your hat off and turns your lips blue. Sound engineers make adjustments for changes in the tides or the weather, and occasionally you can see dolphins or basking sharks swimming in the water below.

The day after I get to Penzance, I buy a ticket to Porthcurno on the open-top bus that runs in both directions around the southern tip of Cornwall. After a chat with the Australian woman sitting next to me, I watch the afternoon performance of Shakespeare’s The Winter’s Tale, and it’s every bit as brilliant as I’d hoped it would be. The 2022 season begins at Easter and will run until around the end of September, and the programme is likely to be released in January or February.