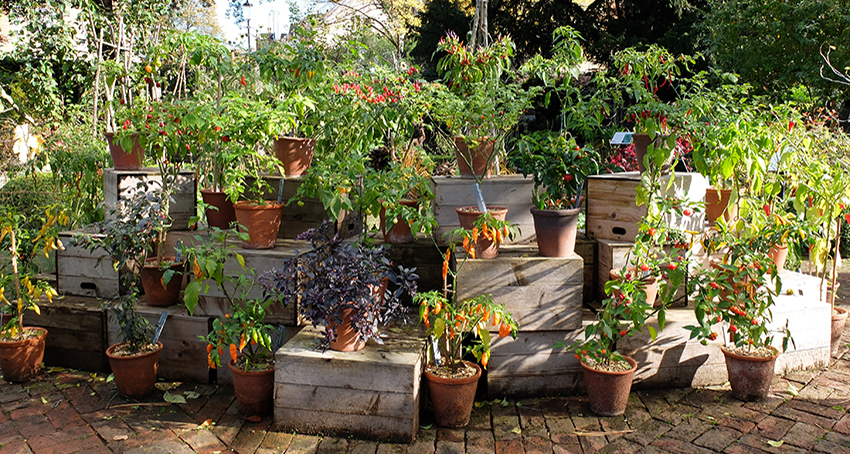 Sunflowers helped clean up the soil in Chernobyl by soaking up and storing radioactive particles in their roots and stems, I discovered, as I pottered about reading the labels and smelling the lavender in London’s oldest botanical garden.

During August’s respite from lockdown, I longed to go somewhere green and beautiful, to connect with the natural world for a few hours. Chelsea Physic Garden, home to over 5,000 medicinal, useful and endangered plants from around the world, has its historical roots in plant-based remedies. So, as it’s medical science that will surely save us all from this pandemic, it seemed like the obvious choice.

I left my car in Battersea Park, walked over Albert Bridge and up Royal Hospital Road, and got to the garden by mid-morning. Initially I tried to study the guidebook and follow the map, but there was too much information for me to take in, so I put them both away and wandered about in a state of baffled amazement instead.

Established in 1673 by the Worshipful Society of Apothecaries, whose role it was to mix and dispense medicines, their apprentices went to the garden to learn about the healing properties of herbs. A cast of horticultural trailblazers have contributed to the garden’s success over the centuries, and their legacies are honoured with statues and plaques. Botanical pioneers, plucky explorers who sailed the globe searching for new plants with special powers to improve people’s lives, and the head gardeners and curators who cultivated, named and distributed them.

The four-acre site is roughly divided into 12 sections. I started in The Garden of Medicinal Plants, which showcases some of the species used by healers, witch doctors and shamens on every continent. Growing in the pharmaceutical section are about 60 essential ingredients of modern western medicines – including aspirin and quinine – from anaesthesia drugs to oncology, lung disease to gynaecology. Blocked nasal passages? You may be prescribed Ephedra Altissima. Constipated? Try Senna Angustifolia.

Situated on the north bank of the River Thames, this place has a relatively warm micro-climate, because it faces south and its brick walls provide some protection from the elements. It’s easy on the eye but being pretty is not its job – it’s more about brains than beauty, more academia than blooming razzle dazzle. Everything there has a purpose, nothing is frivolous, there is meaning in every leaf and seed, each fruit and flower, all the roots and thorns. I found it surprisingly moving, being surrounded by those wonders of nature that I will never understand.

There’s a vast cornucopia of vegetative curios to explore here: useful plants, edible ones, tropical species tucked up safely in vintage glasshouses, reeds for the saxophone. Isatis Tinctoria, or Woad, has been dyeing things blue for centuries. Rosy periwinkles from Madagascar contain two cancer-fighting ingredients, vinblastine and vincristine, which are used in medicines used to treat childhood leukaemia. I learned that Tetrapanax Papyrifer, a shrub with large leaves shaped like bunny ears, has been used in China for making paper flowers since the fifth century. That farmers grow flowers rich in nectar and pollen, like Myosotit Sylvatica (forget-me-nots to you and me), to attract bees to crops that need pollinating.

Europe’s oldest pond rockery delivered the biggest wow moment of my day, not because of the Mediterranean and alpine plants it houses, but rather the materials that were used to build it. Including Tahitian clam shells that explorer Captain James Cook brought back from his voyage to the Pacific on HMS Endeavour, and Icelandic black stone that plant hunter Joseph Banks picked up in 1772. What a magnificent mound of historical bric-a-brac.

Feeling slightly overwhelmed by it all, I stopped for a restorative cup of tea in the covered outdoor area of the café that looks out over the lawn. The waiter saw me trying to decide which sweet treat to order and drifted over to help me out. “You’ve tasted carrot cake many times before, right?” he stated with absolute certainty, “so you should try the orange, lemon and lime cake for a change.” Good advice. It was soft, sugary, gluten and dairy free, and perfectly delicious.

Memorial benches line the paths, so you can sit and listen to the birds or watch the gardeners quietly weeding, planting and tidying up. Studies have shown that connecting with the natural world can help us to breathe more deeply, think more clearly, and feel less stressed. It was strangely soothing, standing in the shade of the Umbellularia Californica tree, which is believed to both cause and cure headaches. And let’s face it, the pandemic has given us plenty of those.

I walked back over the bridge in pensive mood, thinking about how much Chelsea Physic Garden can teach us about both the spiritual and the medicinal healing power of nature.