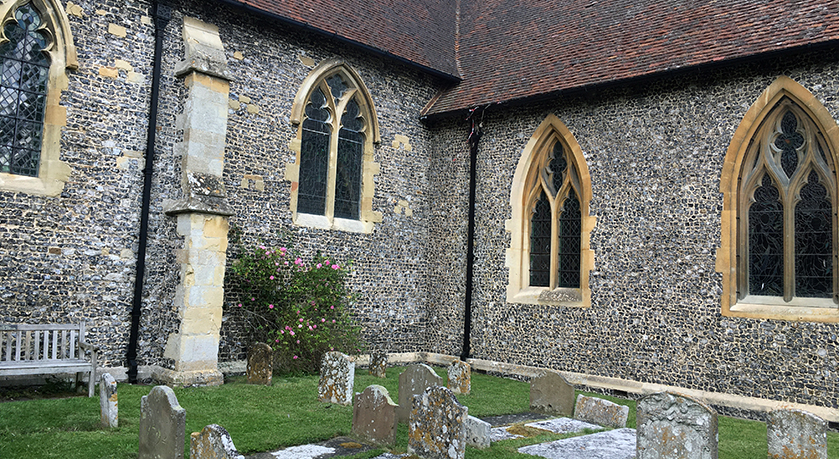 The old church smelled like old church – a slight whiff of damp and ancient stone that the fresh air can’t reach because the doors stay closed to keep the jackdaws out. I sat in one of the few pews that weren’t blocked off by stacks of kneeling prayer cushions, made of tightly tapestried wool in an assortment of colourful designs. I was the only person there. Saint Mary the Virgin Church is huge in comparison to the tiny but charmingly olde worlde village of Hambleden, where it sits, like Gulliver in Lilliput.

I was visiting in tourist mode that hot afternoon, even though it’s just a few miles away from where I live. Lockdown has seen off all my plans for summer travel, so I’ve decided to explore some of the places near me that tourists flock to but locals take for granted. Along with the staycation, micro-travel is all the rage this year.

I began my outing at Hambleden Lock on the River Thames, with its white water crashing through the weir and groups of ducks and geese wandering around. I walked along the brook that runs through the fields at the bottom of Hambleden Valley. All was quiet, apart from chirps and bird whistles and an occasional baa from the hundreds of sheep slowly grazing or lazing about on the grass. Surrounded by dense, thorny hedgerows and a million trees, the fields were dotted with thistles, clumps of nettles and scraps of dry poo. There was a nice breeze and perfect puffy clouds hovered overhead in a vast sky of clear bright blue, with a few grey rain streaks worrying them like dogs.

Hambleden is very beautiful, in an old-fashioned, oil painting kind of way. It’s been there so long that it was listed in the Domesday Book survey of 1086. Its cute cottages are made of flint and brick, with red tile roofs and dormer windows. The place is steeped in history and memories of centuries gone by; unsurprisingly, it’s been used as a film location for umpteen movies and TV programmes over the years.

There is a small shop that sells everything from fresh groceries and local produce to greetings cards, maps and souvenirs. It doubles up as the post office and has two tables outside – so it’s a café too. The Stag and Huntsman is a pub and restaurant with nine hotel rooms and two self-catering cottages. Other than that, Hambleden has a tennis club, a cricket green, a village hall, a disproportionately large garage and that’s about it. The manor house at the edge of the village dates back to 1603. The former butcher’s shop still has a sign saying ‘Wheeler’s Butchery’ outside, but now it’s a private residence.

Parts of the old church were built in the twelfth, thirteenth and fourteenth centuries, and it has stone arches, stained-glass windows, mysterious engravings and curios aplenty. After sitting inside for a while, I tried to read some of the faded headstones outside in the cemetery. A gardener was wrestling his lawnmower through the long grass and wildflowers growing in between the graves. Just out of curiosity, I was vaguely looking for William Henry Smith who died in 1891 – the former MP and grandson of Henry Walton Smith who founded WH Smith – but I didn’t find him. Instead I found a suntanned, white-haired fellow with a yellow t-shirt on, still very much alive and sitting in his little garden behind a low stone wall, smiling and looking like he’d be up for a chat.

The garden was just a few metres across, but one of the loveliest I have ever seen. Quirky. In the middle was a small table and chairs under a pink parasol, with terracotta pots filled with red and white summer flowers all around. There was lavender, a row of sunflowers, and even a bit of lawn. And did I mention the animals? A stuffed giraffe wearing a baseball cap, two toy monkeys and an owl, a ceramic dog, a duck, and two cuddly lambs sipping on a beer.

I did stop for a chat. He told me that he can go to the zoo every day, without going out. He said that he had lived in Hambleden his whole life. He doesn’t like London or Reading – or even High Wycombe for that matter – and can see no reason to go anywhere else. Before he retired, he worked as a maintenance man at Greenlands just down the road (now Henley Business School), once the family home of William Henry Smith, who is now buried just across the road. My new friend warned me not to come on weekend days – the village fills up then with actual tourists, bending down to peer through the mini cottage windows, wandering the narrow lanes dewy-eyed and snap-happy, just marvelling at the sheer prettiness of it all.

I left Hambleden, happy to have seen it with a fresh pair of eyes, and walked back the way I came. By now the sheep in the fields had perked up somewhat, and they were resting less and munching more. The sky had turned more grey than blue and the temperature had dropped as early evening approached.