I am on the riverbank at Aston, a tiny village near Henley, on a sunny Saturday morning. Surrounded by the green of wild hedgerows and overhanging trees, river reeds and fields on all sides. The Thames flows quietly by, glinting in the still air.

Six women in swimsuits have just waded in, waist-deep, talking all at once about the size of their boobs and laughing at each other’s quick-fire tales of bra fails and breastfeeding. Caps and goggles on, they submerge themselves in the cold water and start swimming.

One of these hardy souls is Laura Reineke – an open-water swimmer who, along with four friends, was meant to be crossing the Channel for charity last week. Coronavirus lockdown restrictions have hampered all her plans, but not dampened her enthusiasm, and she waits patiently for the day when she can make the gruelling 21-mile journey from Dover to Calais.

The first thing that struck me about Laura was her elegance and confident, square-on poise. Kind eyes, a warm smile and suntan, she wore a cape over her swimsuit, red toenails in yellow flip-flops, a gold mermaid necklace and long grombre hair pulled back in a bun. She seemed to me like someone who sees everything and is afraid of nothing.

The aim of the cross-channel relay is to raise funds for Laura’s charity, Henley Music School, which gives free and subsidised music lessons to people of any age, ability and means. “We are in every school in Henley,” she said. “We have about 200 children learning individual instruments, school clubs, music school Sundays, an adult orchestra – in all we probably have about 500 or 600 kids and about 150 adults.”

A musician by trade, Laura studied violin, viola and piano at music college and went on to teach and play professionally. She started the music school when her children (now aged 19, 17 and 14) were young, and budgets for music tuition in schools were being cut. The charity has grown steadily, relying on donations from businesses and foundations, and it now has 30 teachers and annual running costs of £60,000.

Laura ran the London Marathon four years ago, but switched to open-water swimming for exercise because long-distance running was damaging her back. “I’ve always swum in the river because I’ve always lived in Henley, and decided that I would go along to the Open Water Swimming Club. And then there’s no going back. Then I started getting into the long-distance stuff, so I did the Thames Marathon, I’ve done that a couple of times. We’ve been to Bled for the Winter Championships and the Summer Championships.”

How does it feel to be in the water? “It’s lovely – you go through absolutely everything in your brain, especially long-distances, when you’re in for hours. You just go through everything, sort everything out, what you’re having for dinner, what you’ve got to do at work, all this sort of thing, and it all just washes away. The Open Water Swimming Club is the best club ever – everybody is open-minded, nobody cares what you look like or how you swim.”

While we were talking at the water’s edge, socially distancing and squinting in the sun, a dozen other swimmers mooched about in various states of undress. One or two in wetsuits, some about to go in, others climbing out after an early morning dip. Families dragged canoes off roof-racks and the place buzzed with an outdoorsy, sporty kind of vibe.

Lockdown has played havoc with Laura’s training plans, because swimming pools were closed in March and non-essential travel down to the Channel was banned. But she and her four team-mates, Jo Robb, Fiona Print, Joan Fennelly and Susan Barry, collectively known as the Henley Mermaids, have improvised and managed to stay fit nevertheless. “We haven’t been able to do our drills in the pool, we haven’t been able to go to the gym. But what we have done is online spin, online pilates, and we’ve been swimming in the river. We haven’t stopped. I’ve never been so fit in my life.”

They were planning to do their first training swim in the sea at Dover, the day after we met. I wondered, how does sea swimming compare with the river? “It is very different,” she said. “With the river you don’t have any waves, but you do have weeds and things. And it’s nice clean water, so if you get a mouthful of it, it doesn’t really matter.

“Whereas the salt can be quite vicious. When you’re spotting, or breathing, the waves can be quite big and you have to come out further – the technique’s slightly different. It’s jellyfish as well, lots of jellyfish, you have to have a high-neck swimming costume so they don’t go down.”

The Channel Swimming Association suspended all planned swims when lockdown began, although it expects them to re-start in late June or July. This all depends on a number of factors, including the rules on international travel and the hospitality sector, as well as tides and weather.

The Henley Mermaids were originally booked to swim in early June. When they eventually get a new time slot it could be at very short notice, or even at night. They will take turns being in the water for an hour at a time, for about 14 hours in total, swimming alongside a pilot boat. The rules state they are not allowed to wear wetsuits, and they cannot help each other in or out.

And when they get to France? “It depends on the weather. Whoever is on the last slot that gets there touches the rock. Or, if the weather is okay and you’re allowed to, you can get out for ten minutes on the beach and have photos and then get back on the boat.”

The team has raised over £12,000 so far for the music school, through an online fundraising page and offline pledges, and Laura is already planning her next adventure – a solo Channel swim in 2023.

As she and her friends swim away, still chatting, orange floats bobbing along behind them, I feel a pang of something. Admiration, inspiration? Maybe both, with a splash of lockdown longing for the freedom and excitement that open-water swimming surely brings. 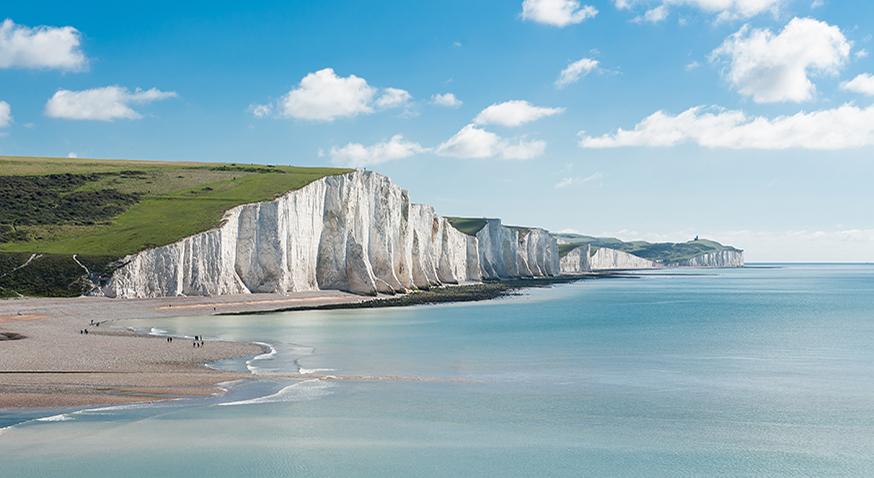