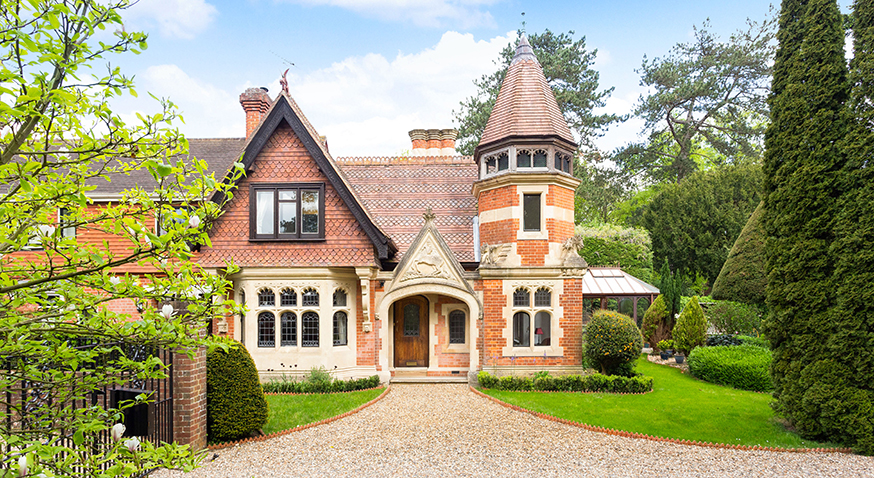 It is not uncommon to see Henley’s visitors standing on Gravel Hill at the iron gates of Friar Park, the grand country estate that George Harrison once called home. They dutifully take their selfies before gazing up the winding drive, wondering what lies over the hill, dreaming of The Beatles and the golden age of sixties pop.

Friar Park House is a huge and elaborate neo-Gothic mansion surrounded by wooded parkland, originally built in the 1890s as a weekend retreat for an eccentric London lawyer called Sir Frank Crisp. After Crisp died it was bought by Sir Percival David and later donated to an order of nuns, who didn’t have the means to be able to prevent the house and gardens slipping into a state of dereliction and disrepair. In 1970, the year The Beatles broke up, Friar Park caught the eye of guitarist George Harrison, who moved in and began an ambitious and lengthy restoration project to restore it to its former glory. The mansion is set within a whimsical wonderland of pleasure gardens, complete with boating lakes, underground waterways, a network of grottos and caves, some rather quirky garden gnomes and an Alpine rockery that famously features a mini-Matterhorn.

The estate originally had three gatehouses – Lower Lodge is the one closest to town next to the main gate, Middle Lodge is further up Gravel Hill near Pack and Prime Lane, and Upper Lodge is in the far north westerly corner by Lambridge Lane. Upper Lodge, now known as Park House at Friar Park End, was separated off from the estate many years ago as part of Sir Percival David’s divorce settlement, and is now a three-bedroom house on the market at a guide price of £1,397,500. Instantly recognisable with its pointy turret, intricate brick and stonework and decorative window frames, Park House is now entirely independent of the Friar Park estate but will forever share its history and flamboyant good looks. It was originally built as the head groomsman’s lodge, which explains the subtle equine references in its design detail, and it has since been extended with a more modern section to make it a sizeable family home.

The front door opens into an entrance vestibule – with a south-facing sitting room with an elegant fireplace on the left, and a dining room on the right. In the corner of the dining room is an extra space for a comfy reading chair, with windows on both sides, at the base of the turret. The grey stonework has been left exposed on the insides of some of the original windows – a pretty, decorative reminder of the house’s Victorian past. The kitchen is in the middle of the house – it has a utility room and a pantry and leads into a cosy family room with parquet flooring. Beyond the family room is a big bright conservatory with a stone tiled floor that opens on to the gardens outside. The kitchen is fitted with wooden kitchen units, blue and green wall tiles and mottled grey granite worksurfaces, and it has a breakfast bar island in the middle.

Upstairs on the first floor there are three bedrooms and a shower room. The master bedroom has an en suite bathroom with handsome teal tiles on the walls and an alcove at one end where the sink goes. One of the other bedrooms has a bonus space in one corner, inside the turret. The house has a gated gravel driveway with a detached timber garage, which could feasibly be converted into living space, and is set in 1.2 acres of land. The landscaped garden is well maintained – it has a large lawn, dotted with a selection of mature trees and plants and bushes of many shapes and varieties.

Because of its age and special architectural interest, Park House at Friar Park End is Grade II listed in a group with the Friar Park House mansion and several other nearby buildings and structures. This property is a rare opportunity to own a 19th century gem with a Beatles connection, set on a large plot and just half a mile outside Henley town centre. For more information or to arrange a viewing, please contact Savills on (01491) 843001.