We arrived late for Sunday’s Reading Festival because we were only there to see Foo Fighters. It’s a mainly young crowd here — a grubby throng of demob-happy teenagers, although I hear the average age went up on the Sunday — so, heads down and sunglasses on, we grabbed a quick cider and headed straight for the main stage.

The mighty Foo Fighters. One of the last remaining bastions of rock ‘n’ roll. But it’s not old school, it’s better than that — more interesting, more intelligent. The Pixies brought a new dynamism to rock music in the Eighties, Nirvana drew from that and now it lives on in Foo Fighters — it’s dynamic and hard-hitting, light-dark, fast-slow, loud-quiet. Foo Fighters songs can be belters or ballads, love songs or hair-raisingly heavy and sometimes both. They are always melodic and full of energy with full-on drums and guitars. They opened with The Pretender and then barrelled through an epic set list from their 25-year back catalogue, including My Hero, Best of You, The Sky is a Neighborhood, Monkey Wrench, Times Like These and All My Life.

Frontman and rock icon Dave Grohl is phenomenal on vocals, and immensely charismatic and likeable too. He chatted to the crowd between songs, and asked several times for the floodlights to be beamed over the audience so he could “see the people — I like the people”. Before founding Foo Fighters, Grohl was the drummer in Nirvana. On Sunday there was a surprise appearance by his friend Rick Astley, singing Never Gonna Give You Up over the top of a version of Nirvana’s Smells Like Teen Spirit with some subtle chord changes — it sounds bonkers but the whole thing worked a treat.

Grohl recounted all the times he has played at Reading. “This festival is my first love,” he said. He was there first in 1991 with Nirvana, and they headlined in 1992. He was back with Foo Fighters in 1995 and they have returned many times since. He dedicated Run to Keith Flint of the Prodigy, who died earlier this year and who was on the same Reading bill as the Foos 10 years ago.

Taylor Hawkins is a beast of a rock star drummer. His enigmatic presence, his wild hair, his swarthy smiling face and phenomenal arm strength make him as good to watch as he is to listen to. He played relentlessly fast on a huge kit including an orchestral timpani drum, and at one point his platform was hydraulically elevated into the air as he performed one of his monumental drum solos. Hawkins’s kick drum often has somebody’s face on it — curiously on this occasion it was Liam and Noel Gallagher from Oasis. A legitimate singer in his own right, he switched places with Grohl to come down on the stage and sing Under Pressure by Queen, one of the show’s highlights.

Foo Fighters played for more than two hours — they don’t do encores, they just keep going until the show is over — and it was every bit as brilliant as I had hoped it would be. It all ended with an extended rendition of Everlong and a firework display over the main stage. The 1975 are reported to have said, during their performance on Saturday night, that rock ‘n’ roll is dead. On Sunday, Foo Fighters proved them wrong. 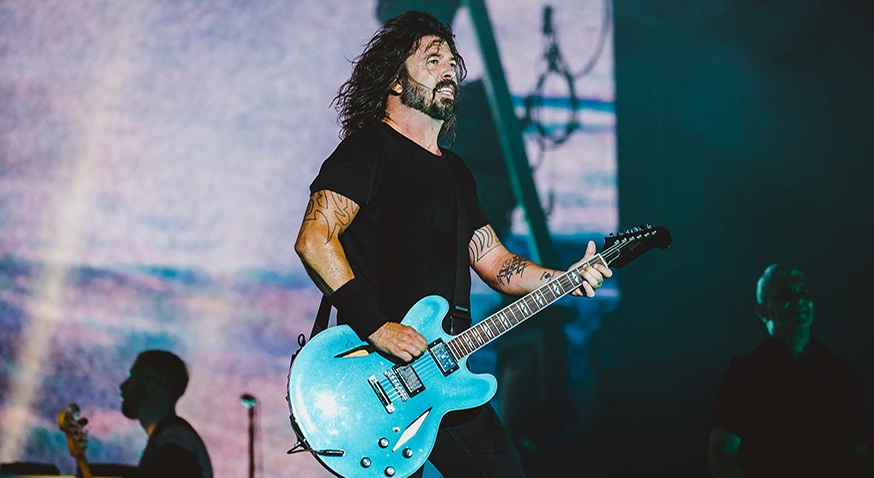