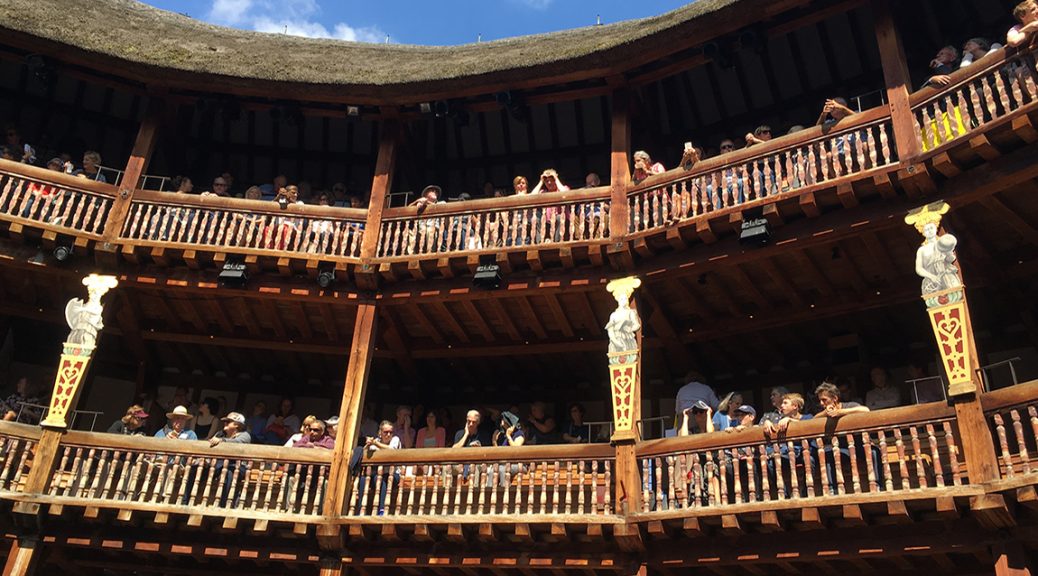 We all stop talking and turn to watch the cast of Twelfth Night sashay out on to the stage. I am visiting Shakespeare’s Globe on London’s South Bank – a replica of the Elizabethan playhouse where William Shakespeare was playwright, actor and co-owner between 1599 and 1613. A circular thatched roof covers the stage and three tiers of seats, but my £5 ticket has me standing in the open-air yard, thrillingly close to the action. Patches of blue peep through the restless clouds in the afternoon sky, a few raindrops fall, a plane flies overhead and two pigeons perch up high, seemingly watching the performance. The eight actors are wearing Doctor Marten boots and wide pantaloons and each one plays a musical instrument – a penny whistle, a mandolin, a trombone – and the theatre fills with merry music and song.

The original Globe, where most of Shakespeare’s plays debuted, stood 750 feet away. It burned down when a cannon was fired during a performance of Henry VIII and set fire to the roof. The theatre was rebuilt in 1614 but closed again in 1642 by the Puritans – religious zealots who insisted that theatrical frivolity was ungodly. London was then Globeless for over 300 years, until the American actor and director Sam Wanamaker came along with a vision to create this almost exact replica, which opened in 1997.

When Shakespeare moved down from Stratford in the late 16thcentury, Queen Elizabeth I ruled and London was a crowded, humourless place. Squashed inside the Roman wall encircling a small area north of the Thames, its residents were oppressed by strict laws and beset by plague outbreaks. Entertainment was forbidden so the playhouses were banished to the unregulated outskirts known as the Liberties, along with the taverns, brothels and bear-baiting arenas. Londoners flocked there to have some fun, theatre was enormously popular and there was an insatiable demand for new plays.

Nowadays, 700 groundlings like me stand in the yard to watch a play; in Shakespeare’s day it was more like 1500. These rowdy commoners who could not afford a seat were known then as penny stinkers because they paid one penny to get in and, frankly, they stank. The smell got worse throughout the play as there were no toilets, so the penny stinkers relieved themselves on the floor, which was covered in hazelnut shells to soak up the mess.

Shakespeare’s Globe is a magical place – still intimate but considerably less whiffy – a spiritual homeland for devotees of the world’s favourite playwright. I feel connected to the past here, through the power of stories that never grow old. Shakespeare’s plays are notoriously hard to understand, but being familiar with the plot beforehand helps. Twelfth Night is a comedy, a tale of mistaken identity, trickery and unrequited love, and the actors perform it brilliantly. Their faces fill with laughter, sorrow, menace and triumph. As they dance one last jig and take a bow to rapturous applause, they beam back at us with gratitude and joy.