DJ Jo Whiley, perennially cool in her baggy gold top, tight black trousers and floppy blond hair, stood atop a big flashing screen at the Henley Festival and took us on a musical stomp through a collection of dance anthems and Britpop classics from the Nineties. The audience danced wildly and sang along with gusto to the familiar sounds of Funk Soul Brother by Fatboy Slim, I’ve Got the Power by Snap, Ride on Time by Black Box, Set You Free by N-Trance, and a whole slew of other hits from one of pop music’s greatest decades. Photos of the bands and iconic images of cassettes and CDs moved across the screen. Disco lights sparkled overhead in pink and blue, loud steam jets and sometimes flames whooshed up from the edge of the stage and giant red balloons bounced over our heads.

The show was great fun – we felt like we had gone back in time and landed in a series of mini gigs by 25 of our favourite bands. On we partied to EMF, Cornershop, James, Primal Scream and Underworld, and Nirvana’s Never Mind really got the crowd going. It was great to hear Firestarter by The Prodigy. The energy from Killing in the Name by Rage Against the Machine was electric. Jump Around by House of Pain did indeed make everyone jump around. The Britpop section delivered a nostalgic blast of Blur, Pulp, The Verve, Elastica and Supergrass, and ended with Don’t Look Back in Anger by Oasis. No Suede though.

I was slightly sad that the festival’s general admission ticket holders couldn’t join in the fun. If you don’t buy grandstand or lawn seats you must stay behind a fence and can hardly see the headline acts on the floating stage, so the cosy homogenous love-in feel that most festivals create was missing. If everyone had been there to dance and sing with the rest of us – and there was plenty of room – this brilliant show would have been even better.

For most of the time all we could see of Jo Whiley was her head popping up from behind the screen, but she did come down to the stage a few times to get closer and shoot glittery confetti over the people at the front. She grinned and waved a lot during the show, calling us awesome, gorgeous, handsome, and she seemed genuinely tickled by the spectacle of this well-heeled black-tie crowd partying like it was, well, 1999. 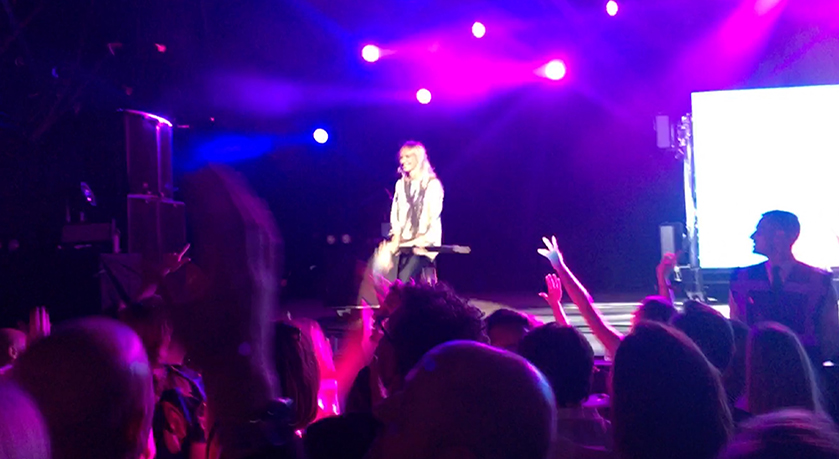